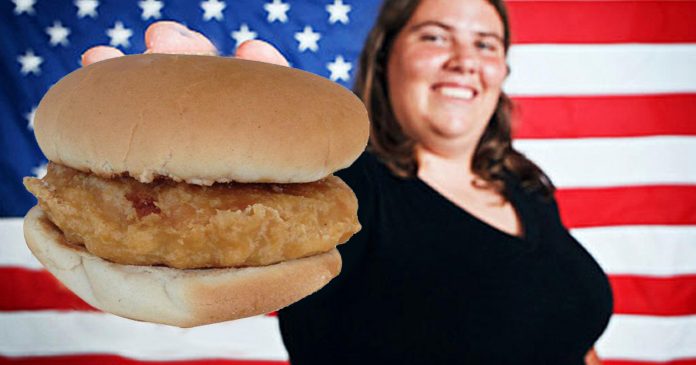 After instigating trade disputes with China and Mexico, Donald Trump has turned his attentions to Northern Ireland and announced trade tariffs on NI exports.

“We have many fine American companies making wonderful crisps, sausage rolls and five lighters for a pound already” explained Mr Trump at his Whitehouse briefing. “So I’m bogging the arm to give US businesses a fighting chance”

The news has sparked a frenzy across the states, as worried US shoppers pillage Walmart and 7-Eleven to stockpile Tayto Cheese & Onion, Doherty’s thick-cut sausages, decks of Harp and McColgan’s sausage rolls – before the price hike takes effect.

The news has also rocked leading NI brands, who are now scrambling to find workarounds for Trump’s latest madcap idea.

“We’re launching a brand new soft-drink for the US market called the American Football Special” explained Maine Lemonade spokesman, Jim Fizz, “It will come in a massive 5 litre camouflaged plastic bottle, so it will be extremely difficult to follow and go on for f**king ages. They’re gonna love it!”

Meanwhile Coleraine cheese has unveiled an audacious new plan to get American consumers buying blocks of traditional Irish cheddar again – instead of pre-made convenience cheese sold to sprinkle on sandwiches and pizzas.

“Our new ‘Make America Grate Again’ campaign is gonna be our biggest yet” confirmed Kerry Foods founder, Kerry Foods. “We even got hats made!”

Sadly however Tatyo is banned from US shelves completely, after it emerged Mr Trump is suing the Armagh crisp giant for trademark infringement.

“The cheeky hurs have appointed a chubby, yellow-faced man with an oddly shaped, massive head as their leader” said a Whitehouse spokesman. “Our laywers will have a field day!”