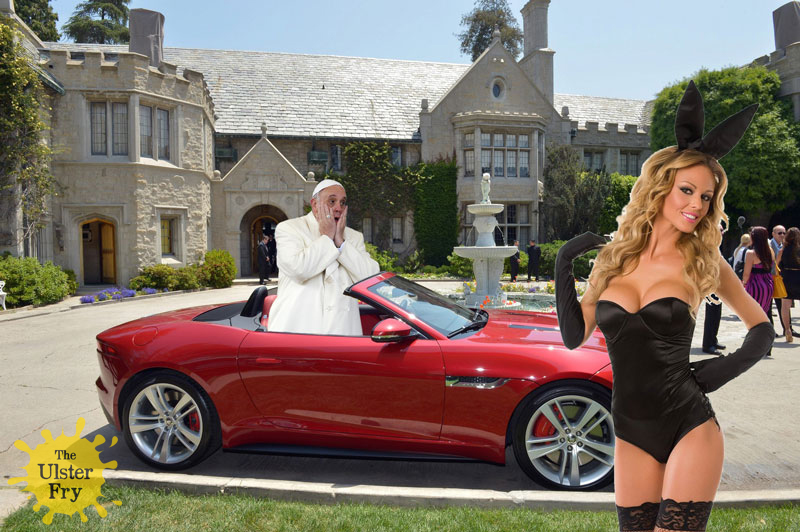 The Pope’s trip to the USA continues in spectacular fashion after the Vatican confirmed that his Holiness would be meeting with Playboy founder, Hugh Hefner later today.

The Pope, who has already built bridges with the gay community, Muslims and even atheists, is set to take his liberal papacy a step further, by attending at a ‘pool party’ at the infamous Californian Playboy mansion. It is expected that the Pope will mingle with a host of top Hollywood stars and young actresses, before saying a special mass addressing his growing concerns about cheap Viagra alternatives.

Even scientologist Tom Cruise has sought an audience with Francis, a development which many have described as ‘bizarre’ given that Mr Cruise believes in some kind of omnipotent celestial being who lives out in space yet suspiciously wants his earthly followers to donate money to his cause. “That all seems a bit suss to us!” said a Vatican source.

Thus far only one celebrity has been confirmed an audience with his Holiness, as rapper Sean ‘Puff Daddy’ Combs revealed that Francis would be coming around to his gaff later for a tour of the his opulent hillside crib. “Aye, he is really looking forward to seeing Diddy’s tonight” confirmed a Vatican spokesman.

In a late development rap-God Kanye West has granted an audience to the Pope this evening.  The two spiritual leaders hope to find common ground on pressing global concerns including what she gonna do with all that junk in her trunk, gold digging how to correctly address his step-father, Caitlin.

It is widely expected that after his rise to presidency pope Francis may bid to become the next Kanye.