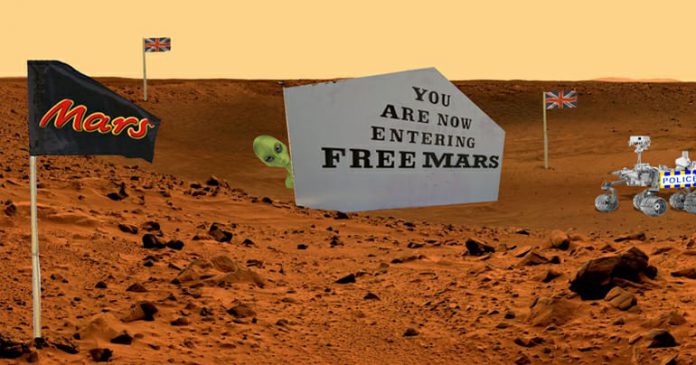 Officials at the Northern Ireland Space Agency have refused to be drawn on the religious make up of the Martian community after they successfully landed a research vehicle on the red planet.

A spokesman for NISA, which also runs a nationwide chain of convenience stores, told The Ulster Fry that their rover vehicle had made contact with alien lifeforms but they had not yet discussed religious issues.

“At this time, we’re mainly trying to work out how they survive on the planet, and whether we can learn anything from their technology,” he explained. “I had hoped to be able to work out which foot they kicked with, but it turns out they only have one giant, slug-like foot so I got nowhere on that front.”

Representatives of our feuding tribes here were quick to claim the newly discovered lifeforms as their own.

“We have examined the footage and they’re clearly Prods,” said DUP spokesman William Prince. “You can see how far apart their eyes are, and lets face it, Mars isn’t really a red planet, its more of a burnt Orange, and sure they have a Martian Season all year round.”

West Tyrone Sinn Fein MLA Philomena Ni Comprehensible rattled off a statement declaring that the Martians were part of the wider republican community.

The Martians themselves refused to comment on the matter, though they did ask us if we thought Covid restrictions would allow the Twelfth to go ahead this year.

The Ulster Fry has been unable to ascertain whether they were hoping to go to Scarva or wanted to book a load of caravans in Donegal.