How to deal with election canvassers 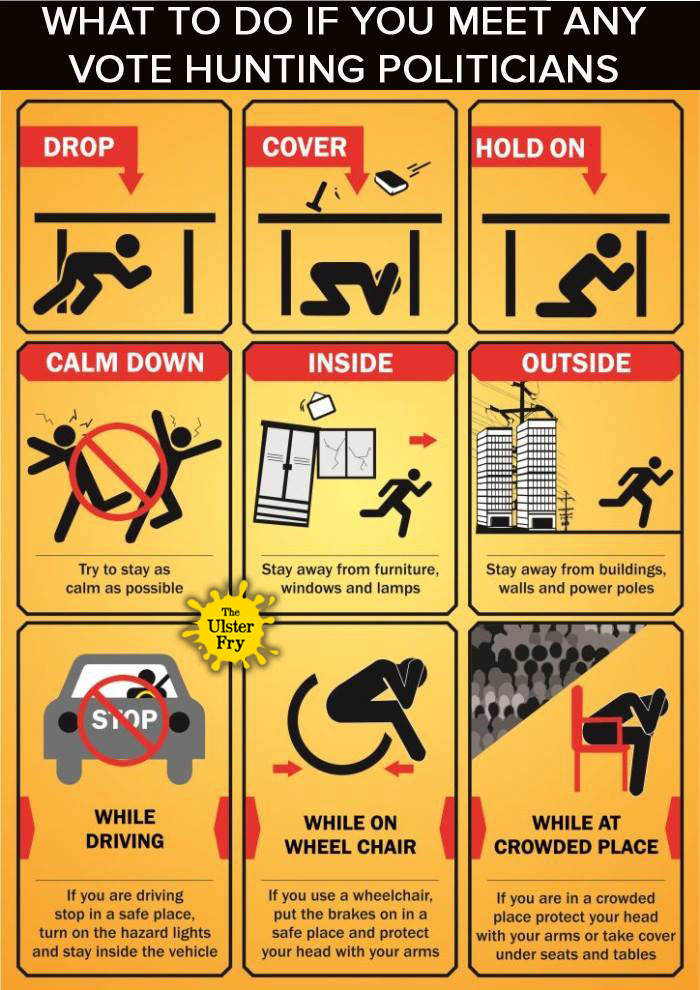 In most democracies people have elections every four or five years, but in Northern Ireland they’ve become an annual event.

Needless to say, this is a very dangerous time for your average citizen, as at any point the doorbell might ring and there could be some ganch standing outside demanding to know how you intend to vote.

The best thing you can do if you hear the door is ignore it, but just in case you accidentally do answer, we’ve been reading up on earthquake survival and found this handy poster that doubles up as a guide for dealing with them. We’ve also come up with a few questions you can ask each of the parties.

Have you come to fix the boiler?

Who is your favourite Sesame Street character, Bert or Ernie?

Does Arlene know the difference between ‘vindicated’ and ‘vindictive’?

If dinosaurs didn’t exist, how do you explain Sammy Wilson?

Who are you again?

See that wee white patch on Colm Eastwood’s beard, is he some kind of badger?

Any chance John Hume is coming out of retirement?

When did killing people become wrong?

Is that how your name is really spelt on your birth certificate though?

Can you explain this Gerry Adams tweet from last night please?

What’s the best wine to have with Sea Bass?

Tell the truth, who do you support, Celtic or Rangers?

Where does Naomi Long keep the flag she nicked off City Hall?

See Mike Nesbitt? When did he become a Unionist?

This whole Unionist pact thing is going well, isn’t it?

Who told you that having someone wandering around in their pyjamas was a good idea for your Party Political Broadcast?

TUV: Why are yousuns getting rid of Julian Simmons?

People Before Profit: Did people nickname Karl Marx “Skid” when he was at school?

The Greens: Who would win in a short-arse competition – Steven Agnew or Naomi Long?

UKIP: Why are you still here?