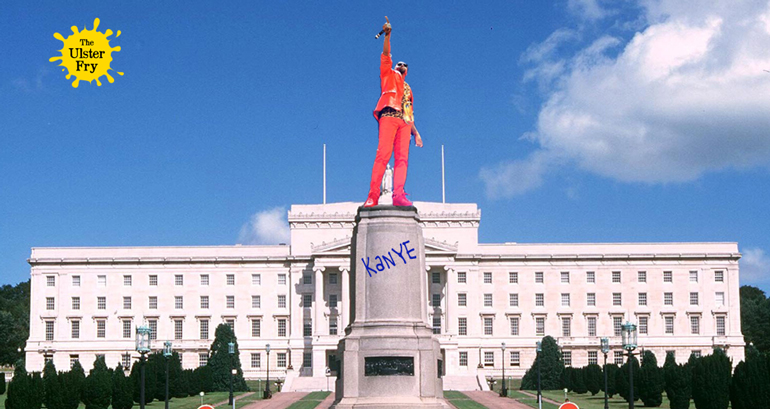 Controversial rapper Kanye West has shocked fans and critics alike by cancelling the US leg of his Saint Pablo tour, in order to make a shock move into politics in Northern Ireland.

The gigs were cancelled after the star treated audience members at one show to a 20-minute rant in which he slagged everyone from Beyonce to Hillary Clinton.

“This type of ranting makes him ideal for a role at Stormont,” says political analyst Newport Anderson. “It’s just a matter of him finding the right party to help him develop his career.”

The DUP were the first party to make a move, promising Mr West a safe seat in Strangford where the star has a caravan, but Sinn Fein seem to be in the driver’s seat. “He’s a known egotist,” explains Anderson, “So he’ll be keener on West Belfast or Tyrone. Then he can get people to chant his name so he can shout out the constituency after it.”

The TUV have also made a move to attract the star, even offering Kanye the party leadership – but only if Jim Allister gets to move the other way to fulfil his lifetime’s ambition of becoming a top rapper.

Mr West is well known for his interest in Northern Irish affairs. “He even changed his name after a trip here in 2001,” we were told by his close friend Barra Best, “He was originally called Canyou, but liked the way people here pronounced it.”

At present there are no plans for Ms Kardashian to follow her husband into politics here.