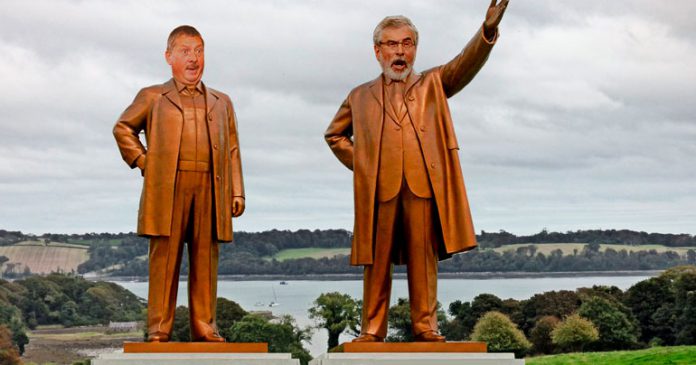 Following the destruction of the statue of slave trader Edward Colston in Bristol, a local artist has unveiled a series of works dedicated to local politicians so that people here can deal out similar treatment.

Anthony Gormless, who won the Turnip Prize in 2015 for a gigantic bronze sculpture of Eamonn Holmes on Cavehill called The Eamonn of the North, revealed his first two statues this morning in a field outside Strangford.

“After the Bristol incident, we’re already seeing heated social media debates about various public memorials across Northern Ireland. People are arguing we should dump all kinds of historical figures or symbols in rivers, and that’s inevitable in our divided society.”

“It doesn’t really get us anywhere mind you, and I thought if there’s one thing we can agree on, it’s that 90% of our politicians are monumental arseholes.”

“Even people who vote for them think they’re idiots, so hopefully launching them into a river or lake will make us all feel better.

The Assembly held a debate on the project this morning which saw MLAs from all parties angrily condemning the sculptures. However, no cross-party agreement was reached as they all wanted their political opponents bucked in lakes

As a result, they eventually approved funding of £10 million for the project, on the condition that the statues have their names carved in both Irish and Ulster Scots.