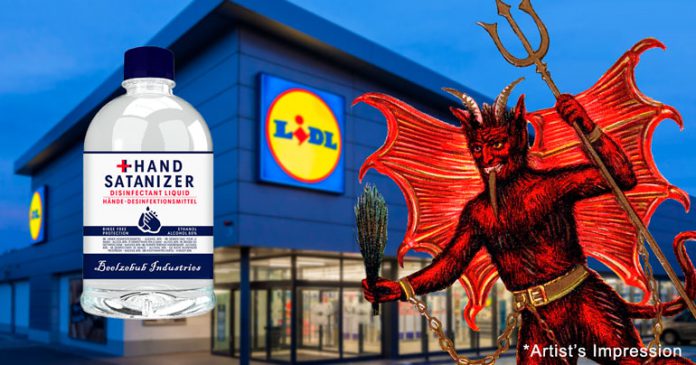 A County Antrim man has inadvertently summoned Lucifer from the pits of hell after buying some dodgy hand sanitizer on Facebook.

“Everything on that page is spelled wrong, so I took no notice,” he told The Ulster Fry. “Last year I bought a Hover washing machine and it didn’t magically levitate off the kitchen floor, but this time I got more than I bargained for.”

“After it arrived, I urgently needed some ski equipment, a welding mask and a horse blanket, so I thought I’d check out Lidl’s middle aisle,” he explained.

“When I was in the queue outside I rubbed some of the so-called satanizing gel on my hands, and suddenly the ground opened up in front of me and flames began spewing out of the resultant void.”

“Suddenly the sky darkened and Lucifer himself rose up out of the pavement, surrounded by a horde of his screaming minions. They began flying around the car park, wailing and knocking off wing mirrors and stuff and I was totally scundered. Everyone in the queue was looking at me like I didn’t have a mask on or something.”

Fortunately the potential for Armageddon was averted by a quick witted shop assistant.

“The guy on the door rushed inside and got holy water, a selection of crosses and a copy of some book in Latin. Turns out it’s Exorcism week in the middle aisle and they had all the gear to perform a ritual that cast Satan back into the underworld.”

“Unfortunately that means they didn’t have any horse blankets, but I was able to get the other stuff.”

We contacted Lidl for comment and they assured us that they’d be getting a range of horse related equipment in shortly, and advised us to keep an eye on their catalogue for further details

This is not the first time someone in The Ulster Fry accidentally summoned the Devil in a shopping related incident. In 2015 Newtownards woman Agnes Toucan conjured Beelzebub after a trip to Argos, but we figured you’d all have forgotten that by now.