Donald Trump “hoping to get to Bangor” during UK state visit 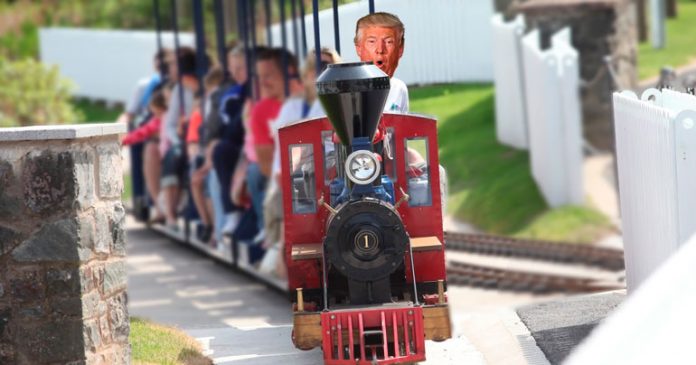 US President Donald Trump has revealed that he “really, really wants to go to Bangor” during his proposed visit to the UK in June.

“Some good friends of mine, reliable friends, have told me that Bangor is a “must visit” destination,” he told The Ulster Fry’s US correspondent, Hank Wankelfecker.

“They said, ‘Why would you want to go to London Donald? London doesn’t have a Pickie Park. And I checked, they were right. It has a Regent’s Park.”

“My friends, my good friends, also told me that The Pickie Park has a really small train and swans that you’re allowed sit on. I fully intend to sit on those swans, and I will make them pay for it.”

UK Government officials have immediately sprung into action, booking several caravans in Ballywhiskin for the president and his entourage.

“We anticipate they’ll need twelve 8 berth statics,” we were told by a foreign office insider. “Ideally, they’ll all have at least two flush toilets, but it’s a busy time of the year on the Ards, so he might have to make do with one of them chemical yokes.”

This won’t be the first time that President Trump has visited North Down. The President previously opened a branch of B&M Bargains in Newtownards and has invested in property in the area by buying the historic Scrabo Tower.

“Aye, I’ve been taken up the Ards a few times,” he told our reporter, “and not just by Vladimir Putin.”